Four Ways to Use Instance Snapshots

Instance snapshots can be invaluable to anyone working with servers. From tracking differences over time, to change deployment, here are some ideas on how they can help you. Then, discover how you can use the free tools in Aireforge Studio to implement them.

By taking a snapshot of your servers' configuration at the right moment, you can use it as a baseline for comparison in the future. This is helpful when:

When you're deploying changes:

Take a snapshot prior to any changes to use as a configuration back up. Then, when you're making changes, you can test them against an exact recreation of your servers, helping to minimize mistakes when you go live. You can also do this during performance tuning.

When someone else is deploying changes:

With a snapshot, you'll be able to see any impact others' changes may have had on your servers by comparing a pre-changes snapshot with post-release servers.

Working with servers that you don't have access to? Get your customer to capture a configuration snapshot, then use this for analysis, comparison and more. This way, you'll get the information you need, save support costs and reduce turnaround time.

When you've got a server into an ideal state, you might use a snapshot of it to:

In Aireforge Studio's Compare module (totally free), you can capture and save a snapshot. Then, use it for comparison against the same servers (for comparing server differences over time), comparing against other servers (useful when using your server as a golden template, or for viewing and sharing.

You will then be prompted to save the snapshot to file. That's it! You can now use this saved snapshot to compare against any of your servers within Aireforge Studio.

Press 'Load' and select the snapshot to open. If you recently took the snapshot, it will appear on the drop-down menu.

Next, a dialog will be shown to let you choose what to do with the snapshot: 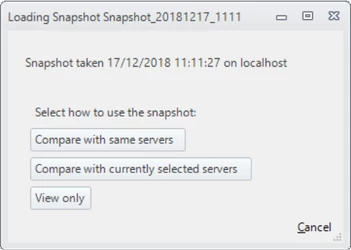 When comparing the snapshot against any servers, the comparison will be against the current state of the servers. You will now be presented with the comparison results or a view-only snapshot file.

All of the functionality in this post is free.